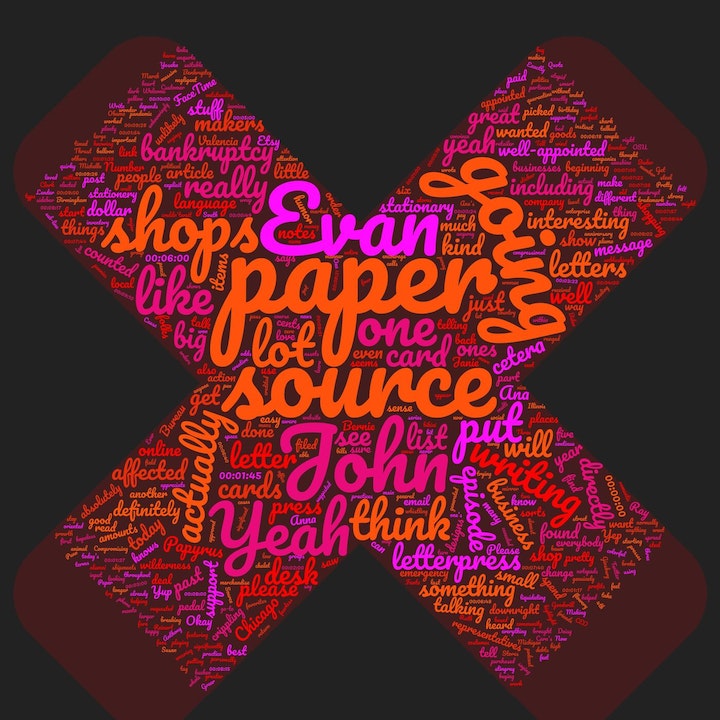 Steel Petal Press (based in Chicago, like Paper Source)

[00:00:00] John: [00:00:00] Welcome to episode 25 of stationary orbit. We're all here to learn more about creative letter writing. Okay. And today's episode is actually going to be an emergency episode. We felt that the breaking news was so pertinent to the stationery community. That it couldn'twait. So we're going to record this and put it out today.

We're going to be talking about the paper source bankruptcy today. This is something that Evan brought to my attention

Evan: [00:00:24] Yeah, that's right. I found this as big a deal as it was through Ana at the well-appointed desk. It seems that it broke first by Janie Valencia. Who's the founder and CEO of card Bureau and a Michigan alumni like myself.  And paper source a major retailer is going bankrupt after having purchased and requested significantly larger amounts of inventory than they normally have.

John: [00:00:49] Yeah. And I think that's the important part here is that paper source had picked up Papyrus here last year when Papyrus went under. And so that's actually how [00:01:00] paper source shows up on my map out here is cause they'd picked up the old Papyrus stores, but yeah, they had put in a massive beginning of the year order.

Evan: [00:01:39] Or downright crippling and odds are that many of these places will get paid pennies on the dollar, if at all.

John: [00:01:54] Yeah. And like we said before, this is something where they put in this large beginning of the year order [00:02:00] and. We have to think that they had to know that this bankruptcy was going to be filed for because they timed it so that they actually had received the shipments of these orders before they filed for the bankruptcy.

So this is definitely some pretty low playing in the business field. And while paper source can be credited for helping some of these letter presses. Get off their feet and helped support some of them in terms of their growth. This move is going to take away any kind of any kind of Goodwill within that entire group of people.

So I think that the big. The big message that we're trying to put out here today is going to mirror what Ana put out in as well as what a lot of the other letterpress shops have been putting out, which is please stop shopping at these big multi shop. Stores like paper source.

And if you really like some of these letterpress shops, please start shopping directly with them. And we are going to have the list of the ones that [00:03:00] we were able to find that were affected by the paper source bankruptcy. And we will make sure that is in our show notes. And we'll also be talking about a few of them here in a little bit, but yeah, definitely.

Please try to shop through your local shops.

I've already talked to Anna about this. She knows what I'm doing and approved it, but I thought the way she wrote this was perfect. And I don't want to change it. I just want to read it out. So this is the, this is Ana Reinert. It's a writing off of all appointed desk. Not anything I generated, but here we go.

[00:04:00] So why is she telling you about this to convince you to no longer spend even a cent at paper source? Ever again, makers are very unlikely to see even a penny or cents on the dollar for the outstanding invoices. So as much as our instinct is to buy goods from paper source so that they make good on their debts.

It's unlikely that they will actually pass on any of their profits to the makers. Number two, to encourage you to support small local stationary shops like CW pencil, enterprise wonder fare, baum kuchen, little OSU. Yoseka stationary.  , Greer, Chicago, et cetera, et cetera, and small online shops.

Please see the sidebar for some of her favorites. And let's see, we've got Cara's costumes, Penn chalet, Fanta, pluma Birmingham pen company et cetera, et cetera. And Three. If you found something that you genuinely loved at paper source, continue to support those makers by directly buying from their Etsy or online shops.

And almost in all the cases, if you like their goods, [00:05:00] turn them over. They're going to have the letter press name on the back of the card or the back of the stationery. So all of these are marked paper source. Doesn't do a lot of their own stuff. So if you love some of these groups go find their Etsy shops or online shops.

Number four. Write an email or a letter to paper source one to five South Clark street, Chicago, Illinois, six Oh six zero three, telling them what you think of their business practices. Tell them if they can't pay their bills, they should return the merchandise to the makers. Quote, unquote liquidating assets you never paid for is stealing number five past the links in this post on to other so that no one will unknowingly spend money with paper source.

And that is actually the main. Thrust of this episode is making sure that everybody out there knows what paper source has done and that they have done it in a knowing and negligent manner to really harm some of these small letterpress shops.

John: [00:06:18] Yeah. And writing letters to your representatives. As much as email is easy and as much as phone calls are easy letters are the actual ones that get counted. And anyone who has worked in a congressional office will tell you that letter writing is not a you're not whistling into the, to the dark on that one.

And you're actually going to get that input is going to be counted.

Evan: [00:06:40] Exactly. So we wanted to highlight some of what we saw at a few of these places. Cause there's a lot of really interesting designs.

John: [00:06:48] Yeah, absolutely. And I think that let's see, where was it? The paper wilderness shop has some stuff on there that is a very wilderness animal [00:07:00] oriented, but they have one here. It's a, I'm a hopeless romantic, and they have a manta Ray on there. They have another one. Oh, was it the Ray of sunshine?

And it's a stingray. They have one with a shark wearing a bikini and it's the sub-line on it is smart, strong, fearless woman. It depends on what kind of a sense of humor you have, but that one's a quirky one for you.

Evan: [00:07:23] A lot for a lot of people, the card Bureau has plenty of interesting ones, including ones, including cards and notepads, featuring Ruth Bader Ginsburg, Michelle Obama, Susan B, Anthony and others, as well as a Bernie mittens sticker,

John: [00:07:44] Yep. Yeah. And yeah, I'm looking at the the website for unblushingly, which is another one of the companies that was affected and they actually have a Biden, won happy birthday deal in there.

John: [00:08:02] Yeah, one of them I like on here and it's a great message. Now, even with the way, things starting to wind down with the pandemic, but they have one with a heart balloon and it says love is not canceled.

John: [00:08:17] Yeah, absolutely. And then a yellow Daisy paper company best card I found on the site, or at least for me is an anniversary card that says you had me at, why are people stupid?

Evan: [00:08:31] That is a great one. The social type has a whole series of quarantine cards with all sorts of interesting sayings, it seems. FaceTime with a space greater than FaceTime trademark.

John: [00:08:44] Okay. Yeah. And let's see steel pedal press which is in Chicago and there stuff, I can't really can't really talk about some of their cards here without Compromising our no explicit language tag, but let's say [00:09:00] if you if you appreciate the not suitable for work cards and your friends have that kind of a sense of humor.

This is definitely a go-to place for you. That's a steal pedal, press.

Evan: [00:09:10] Th they have a lot of them with they use language that is a little flowery, but very nice appear to be very nicely done. Lender, press card.

John: [00:09:28] Yeah. Yup. So anyway, like we were saying before, we're going to have the list of the folks that we're aware of now that are letterpress shops that have been affected by the paper source bankruptcy and.

We are going to put that into our show notes. We're going to put a couple of other items into the show notes, including the link out to Ana's article on wall appointed desk. And just wanted to let everybody know out there that if you have been a paper source, [00:10:00] Customer in the past, please start using the letterpress shops directly that have been supporting paper source.

And if you have not heard about paper source in the past, please do not send your business to those folks. I think that's going to pretty well, wrap it up for this emergency episode.