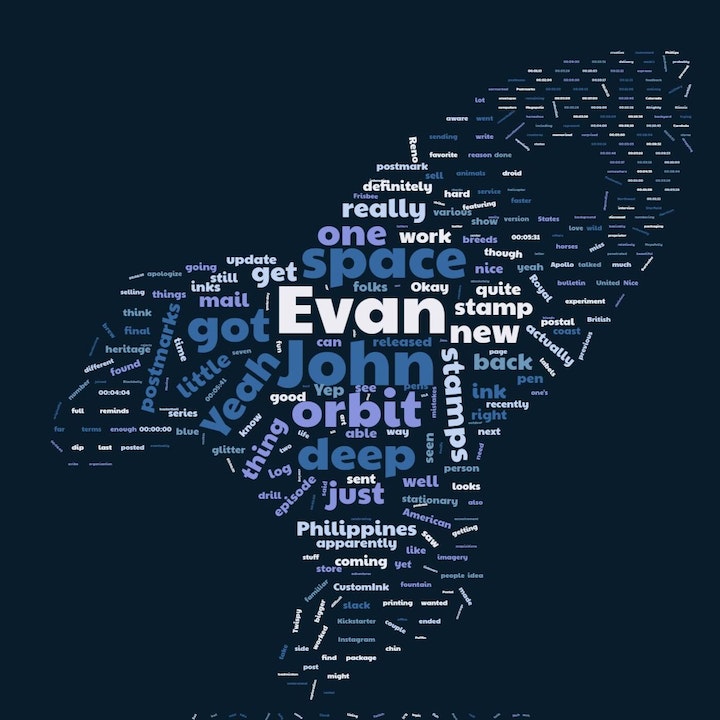 [00:00:00] John: [00:00:00] Welcome to episode 35 of stationary orbit, where we're all here to learn more about creative letter writing. I'm your host John West, and I'm joined by our co-host Evan Harrison. In today's episode, we'll be talking about the postmark experiment with an update and a CustomInk from the Philippines. So Evan, I understand you've got a new ink.

Evan: [00:00:19] That I do recently, I was able to go to a, found a pen store for the first time. Two or more years in person. And so from the store near me, I got the  note number seven his seat, his Creo it's the number seven. It's a nice relatively light blue shades. Very well, a little dry, but not too bad.

I have it in  a pilot and it's a nice thing to write with.

John: [00:00:46] Nice. Yeah. I'm not familiar enough with the the numbering system for that, that ink brand. I've seen plenty of swatches, but I haven't memorized the numbers.

John: [00:01:13] Yep. So I've got a couple well of new acquisitions . One's just on the personal side, the other one's a little more general. Earlier this week I backed the. Drill log Kickstarter out of Japan that Brad Dowdy had done a Twitch stream for the drill log.

And I was watching through that and decided not to get the full stainless steel body version of it because apparently it's really the, all of the pen bodies are really short and that one is extremely heavy. So I just went ahead with it, Kickstarter version for that. And. The reason why I'm excited about it bleeds into the next topic, which is new ink, but it's not just new ink for me.

It is the new [00:02:00] stationary orbit deep space CustomInk that we had made over here in the Philippines by new brew inks. And I was able to get hold of the proprietor for new brew inks and worked with him.  I was originally just going to buy some inks for folks that are over in the United States and he brought up the idea that he can do custom inks.

And I had this idea in my head for a while about a potential CustomInk for stationary orbit, which would be the deep, dark blue of the background field with. A really strong silver shimmer to it, to represent like the Starfield over the top of the deep blue space. And he really nailed it. It is remarkable how good the glitter is on this.

However, the glitter is so much in it that I don't think it's going to be easily usable in normal fountain pens. I think I'm going to have that [00:03:00] drill log in order to write.

John: [00:03:06] Yeah, there you go. I can get a Quill go to the really hard route, but yeah,  it's definitely a fun ink. It's I've I had 20 bottles made. I've got a few of them earmarked for different folks in the states. And then probably the rest of them. I might sell on slack or I may sell at the Colorado pen show coming up in October, depending on when I can get myself out of the Philippines.

John: [00:03:36] Yeah it's beautiful in person. If you're a glitter person, which I am which is the reason why this is my ink. I absolutely love the way this thing looks on paper on a swab, but it'll definitely be interesting to see how well the drill log handles it or some of the other dip pens.

John: [00:04:04] Yeah, that was a, that was one of my adventures over here in the Philippines. For that I've still got a couple other things that I'm trying to work out.

I wanted to get up to one of the scribe fountain pen stores, but that hasn't quite worked out yet. The rental car that our team has ended up with a flat tire. So I couldn't run up there yesterday. I really wanted to do that for this episode, but it didn't quite work out. Moving along we've got a new postal bulletin and I guess we've got a new few space post marks.

Evan: [00:04:35] Ah, that's right. These are not some of the NASA or space sets or eventually ULA. Postmarks that are for various things in orbit. But for the greater Reno stamp and coverage, they show they. Several postmarks including  two celebrating space exploration. One of which is the Mars Rover and helicopter 2021.

Evan: [00:05:10] Yeah.  They are both for the Reno stamp show. There are a few other miscellaneous Postmates, but those are the two that I found recently that I liked the most,

John: [00:05:19] Nice. Very good. And there was also some stuff that it came up on Instagram for the British Royal Phillips hetic.

Evan: [00:05:41] The Royal mail is a very good Instagram. And one of the new stamps that they've released is a set of wild coast animals featuring various different animals found on the coasts of Britain.

So they've got some birds, you've got some orcas, some seals, the military. See horses, crabs, some fish and some.

steps that folks up in the Pacific Northwest would be a little more familiar with, but yeah, I was not aware that some of those creatures were. Living off the British coast. I know one of them that lives off the Scottish coast that they missed on here are basking sharks.

Evan: [00:06:20] They miss basketball shorts though. So Ms. Puffins though I would not be surprised if there is already a whole series of Puffin stamps of which I do not know.

Mail sent out from over here. And then the other thing we had to talk about today was a final not quite a final update, but a close to final update on the grand postmark experiment [00:07:00] of 2021. And finally got a package back. My wife was able to take delivery of it and it was from the. Megapolis center in Kansas city  and they had sent back all of the packages, all kinds, bring them together in one package. So see how much carnage there is on in terms of the packaging that was sent back. But apparently all of the remaining lots of those postmark letters were sent back to you. And they all apparently have the color postmarks on them for the, especially for the droid series.

I saw those, I didn't see any of the chin, wuh, postmarks that were coming through, but apparently the error was entirely on my part. I was doing stupid things faster using computers, and I had gone through the process of printing all of the address labels for those. And I managed to put down the wrong. Zip code [00:08:00] for every single one of the labels. So you want to do one mistake and it turns into 10 mistakes really fast.

John: [00:08:10] yes, they do. And so I've got to go back through those when I get home and take a look at the. How the dyes penetrated into the envelopes? , how sharp the printing was on them. Check through to see if they had any other rejects that ended up with just the black and white postmarks on them. And as I said, I think I saw just the droid postmarks in there.

So the chin shin, Wu postmarks might still be out in the wild somewhere, but I've got to work on getting those done.

Evan: [00:09:04] That happens with any organization of a large enough size. There is one thing from the previous postal bulletin though that I forgot to mention we've talked about a few of the stamps that have been, that are being released before, and they just released the artwork for the backyard games stamps featuring horseshoe, croquet Frisbee bat or badminton.

Cornhole and some others and these will be released on August 12th from Rosemont, Illinois.

Evan: [00:09:35] Yeah. So this art reminds me a little of the outdoor series they did last year. I actually still have some of those stamps here. They sold out very quickly. Some of my favorite stamps from recently the art just reminds me of that. I haven't seen what other accoutrement they're selling let they sell the espresso stamp coasters and the such a, so I don't know if they're selling a Frisbee with the stamp on it. [00:10:00]

That'd be one way to deliver your mail.

John: [00:10:03] then actually down just the next page, they actually had a full page thing on here for the S heritage breeds stamps that have a little better imagery for some of those stamps that are coming in.

wasn't quite as good.

Evan: [00:10:28] Yeah. The heritage breeds that that Barbeau Barbados Blackbelly sheep still looks like it's staring into your soul.

John: [00:10:52] Yeah. Alrighty. Well until next time we've got some interview requests to various people, but have not heard back yet. [00:11:00] And.  The work here in the Philippines is making life a little difficult on the podcast side.

So I do apologize to the listeners for some of the lack of movement in certain areas, but we'll work on that. And

Evan: [00:11:12] Yeah. Hopefully we've got some fun stuff coming up, but  life and last bit, it's been a little busy for both of us. So we apologize for the brevity of this week's episode.