44. Letter writing for the Queen 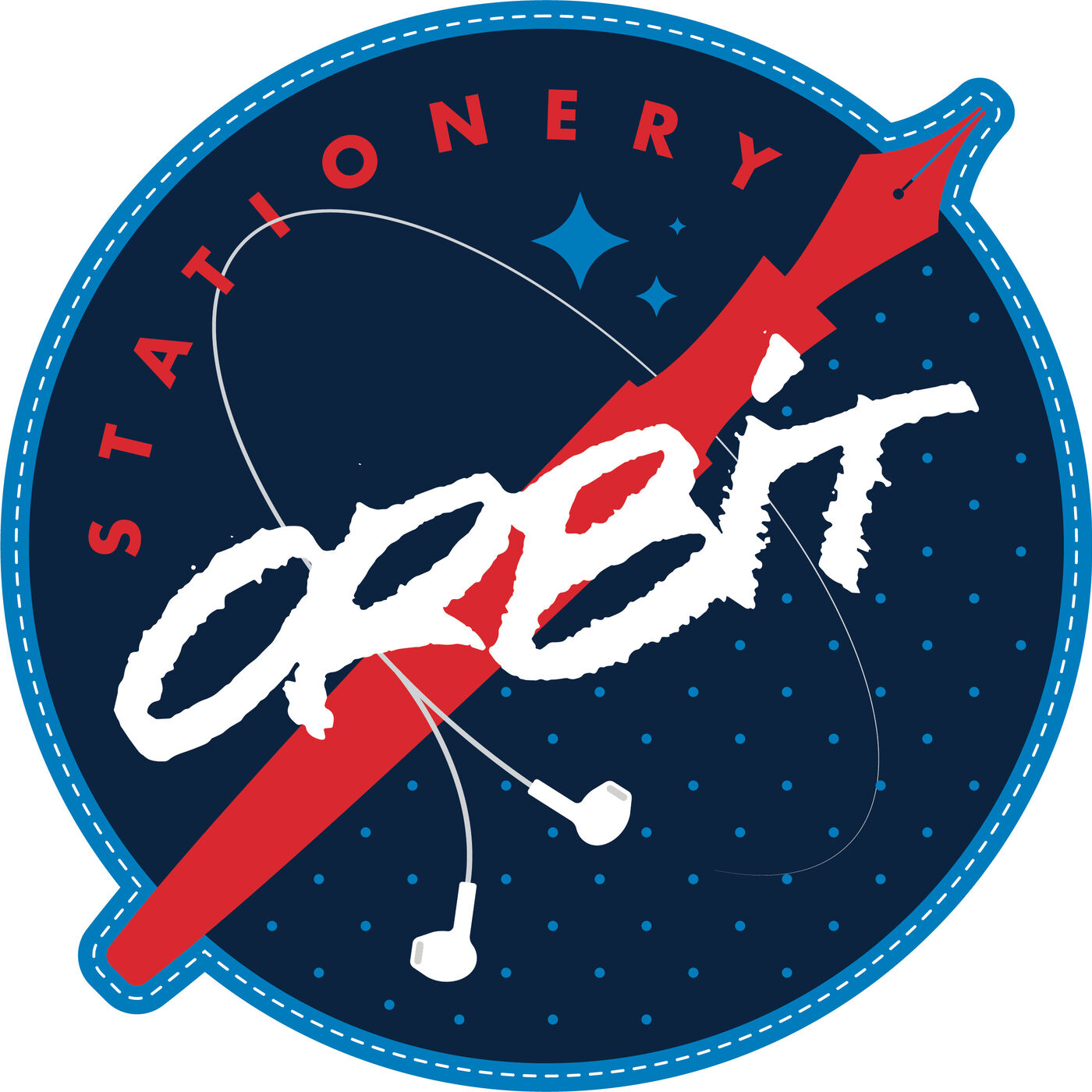 In today’s episode, we will be catching up with new acquisitions, the latest postal bulletin, and more news of letter writing in the age of email.

Barnes & Noble CEO James Daunt will oversee both companies. While the two businesses plan to operate independently, it hinted at possible partnerships in the future.

The acquisition will provide Paper Source with the funding it needs to emerge from Chapter 11 bankruptcy.

44 Letter writing for the Queen

[00:00:00] John: Welcome to episode 44 of stationery orbit, where we're all here to learn more about creative letter writing. I'm your host, John Weston. I'm joined by our cohost Evan Harris. In today's episode, we'll be catching up with the latest postal bulletin and more news of letter writing in an age of email.

So let's get started with the postal bulletin.

[00:00:19] Evan': Yeah, that's right. We've got not a ton this week, but we've got some interesting pictorial posts. No new stamp announcements that I saw, but just general pictorial postmarks you've got lighthouses in Ohio. You highlighted as one of them for two different ones for the marble headlight house and the port Clinton lighthouse, both of which are logically on lake Erie, the least great of the great lakes.

The interesting thing to me on this. They've got this listed under a separate section called postmark America. I'm wondering if this is going to be an ongoing thing for them.

[00:00:54] Evan': I believe so, but according to the blurb in the postal bulletin, postmark America registered [00:01:00] trademark is program is designed to feature graphics related to a theme or image that pertains to a specific tourist location, town or region. The postmark is applied upon request both outgoing. On handbag, a filet that collectibles these postmarks will be available any day.

Participating post office is open our request, my spare least the minimum of first-class mail postage. So just general stamps customers must present items for post-marketing honor before the official postmark date requested on the image. So I presume these are adjustable dates and I don't know what else is in the postmark America.

[00:01:47] Evan': Yeah, we've seen variations on this Plymouth 400 before. Especially cause it is related to a stamp that came out last year.

[00:01:53] John: And we've got another one from San Juan, Puerto Rico. That's coming in and that's a hundred [00:02:00] year anniversary stamp for one of their stations. And there's another one in here from a Gilbert, Arizona, but pretty light on postmarks this time around and no new stamp announcements. As you had mentioned

[00:02:14] Evan': yeah. I imagine that a lot of people postmarks are gearing up for the. Christmas and new year's holidays. Hanukkah this year is very early, so gone the starts of the night. This comes out. So it's very early this year.

[00:02:28] John: Wow. That is, yeah. That's two weeks in advance of Christmas. So Yeah the next one we've got on the show. We've actually got a little bit of up on here from the paper source bankruptcy episode that we did early on when Evan came on board and this one kind of slipped through the cracks on me a little bit, but this came out on May 11th and it turns out that Barnes and noble is the group that came in actually not Barnes and noble, but Elliot investment management who owns Barnes and noble[00:03:00] has acquired.

Paper source and they are actually going to be funding or they have funded paper source with enough funding to bring it out of chapter 11 bankruptcy. So I'm hoping that means that all of those vendors that we're about to get shafted by paper source actually did get paid. I, need to follow up with a few of them that I had seen in the. source bankruptcy announcement. And I'll make sure we get some up on that to see if any of those folks actually got paid or not to see whether or not I recommend that anyone start using paper source again, at this point in time, I'm going to leave it on the no

[00:03:42] Evan': Yeah I would imagine if they're getting them getting paid is dependent on if they accepted anything. So if they accepted a lower offer, odds are, they will not receive the full amount. But even if paper source has repaid them, there so many good independent. Stores and creators [00:04:00] that we've listed in our emergency episode, as well as throughout just generally when we find interesting things that you should be, especially if you're ordering online, you should be able to directly to various sources as opposed to ordering the ordering through papers.

[00:04:15] John: Yeah, I completely agree with that. Yeah, please. Keep your money going out to the small stationery makers. And if you can the one other thing about the announcement that I was happy about, and I don't know how much it's worth having. One psychopath coming in after another psychopath. But the leadership for the paper source company is going to be taken over by a Barnes and noble CEO, James daunt.

And he will oversee both of the companies, which means that the former CEO, Winnie park is out of paper source. Hopefully that's some karma coming back to take care of.

[00:05:12] John: Yep. So onto happier news, there is a. Job posting out there in the world right now that has somebody's name written all over it. And it is at Buckingham palace and they are hiring somebody to write letters on behalf of the Queen.

[00:05:30] Evan': That's correct. But the, in palaces looking for eight someone to deal with through correspondence, I imagine there's still going to be some things thrown in the mail. Spam mail that randomly gets delivered, probably doesn't get a response, but this is the sort of job to respond to a lot of the Queens official mail.

So working on things like people will write requests for sensitive items or for, I know things like people, 100th birthday receive a special card from the queen [00:06:00] that would be handled by this office.

[00:06:02] John: The queen actually still gets thousands of letters addressed to the royal household every single year. So this is, this job is going to keep whoever that is real busy. Probably going to be a good amount of writer's cramp involved in that. And the. Position pays 23,500 pounds per annum.

So I'm not the greatest pay.

[00:06:32] Evan': it's not the world's best job, but it is I'm far from the worst. I mentioned the benefits of working in Buckingham palace might be nice though.

[00:07:05] John: Yep. So best of luck to whoever lands up particular gig, and we're going to keep it on the idea of at least aristocracy, if not royalty. And even though this one's a fake aristocracy, it's still kind of aristocracy. And there is a show out there in the world called Bridgerton and it has. Rejuvenated what they are calling Regency core, which is from the Regency period.

Regency core from the early 18 hundreds. So a lot of the big Imperial dresses, corsets gloves, and letter writing. So some of the letter writing has actually hitched a ride along this. There are now people that are watching Bridgerton getting into what's called Regency core and starting to pick up wax seals.

And we've got a link in [00:08:00] the show notes for one of the stories in here and the lady that wrote this going through a bunch of different wax seals and how they fit into this idea of Regency core. And she actually found some real, pretty wax seals in here. She actually has a couple of a dual color ones.

[00:08:19] Evan': Yeah. A lot of really good images of seals. A lot of the zines I have seen before some of them I haven't and for one that appears to include sprinkles in it.

[00:08:34] Evan': Yeah. If anyone is curious the Regency period specifically officially was 18, 11 to 1820 when prince George became a prince Regent over his father, mad king George, the third until his coordination, though, depending on who you ask, you can last from as early as 1795, when he was started on officially being Regents until his death and the beginning of queen Victoria's reign in 1837

Run called Broadway Core and they actually touched on cottage core, which is another sub genre. So a a bunch of fun geek girl stuff out in the world. And if any of you are interested in that stuff unfortunately Evan and I are not a great. For that kind of stuff, but Joanna and summer are a very good source for this stuff.

So please go check out the link in the show notes for charm bomb and international geek girl pen pals club there. They're awesome.

[00:10:05] John: Yeah, this is this is along the lines of this story that we saw earlier in the year where between using x-rays and algorithms and that kind of stuff. The folks from unlocking history had unfold. W one of the letters out of the Brianne collection, while apparently the conservators are using x-rays to go in and they are looking at some of the censored portions of Marie Antoinette's letters to her lover, which was Hans Axil Von Fursten of Sweden.

And it was actually axle Vaughn person who went through. Censored these letters, he just scribbled a bunch of the stuff out and it turns out that between x-rays and x-ray diffraction XRF, they were actually able to go through. And this is a great article in here, [00:11:00] but they actually went through. With an an XRF , and they specifically looked for specific elements and it turns out the magic number was for copper and they were actually able to look through the censored scribbling and saw the actual words that were written and it turned out that the copper spectrum was the appropriate spectrum for them to hit.

So they're actually able to go back and look at these redacted letters so that they can see some of the stuff that was written between Marie Antoinette and this Count.

[00:11:35] Evan': No, it's a really neat, both scientific and historic find and there's, and I'm hoping there's going to continue to be more and more, not necessarily Marie Antoinette, but on this general idea of finding a, being able to use these subjects and find other pieces I know in the art world, they've even used it to find original pencil sketches behind drawing.

[00:12:20] John: And there is another article I've actually got two articles linked in the show notes for this. And the other one was for the spectroscopy that was done on the same letters. And it Go quite in to as much depth, but it's nice to see that there were two different sources for this same letter and the same techniques that they used.

[00:13:01] John: yeah, with that all being hand mixed. Absolutely. All that is everything we had in the shownotes. I know that we're going to be doing some shorter episodes here coming up, just because of the holidays, as well as some craziness that's going on in the world with me, I actually just got my work visa for Singapore today.

So that is all on. And. And we'll keep you in the loop on that kind of stuff, but please be patient with us here over the next couple of weeks. Probably actually probably the next couple of months as we work through some of the challenges of keeping this podcast running while I'm running all over the world

[00:13:47] John: Yeah. hope everyone had a happy Thanksgiving and we will talk to you in two weeks. Be proud of your snail mail.